Be the face of change 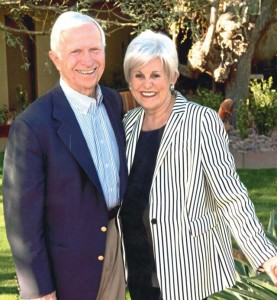 Native Arizonans Lattie and Elva Coor have a rich tradition of giving back to the community in a variety of leadership roles.

Lattie F. Coor, President-Emeritus and Ernest W. McFarland Arizona Heritage Chair in Leadership and Public Policy at Arizona State University, is chairman and CEO of the Center for the Future of Arizona. For the past 26 years, he has served as a university president, first at the University of Vermont from 1976 to 1989, then at Arizona State University from 1990 to 2002. Before becoming a champion for education, Lattie graduated with high honors from Northern Arizona University and earned his Ph.D. in political science from Washington University in St. Louis, Missouri, where he later held faculty appointments and served as university vice chancellor.

Lattie received the Anti-Defamation League’s Jerry J. Wisotsky Torch of Liberty Award in 1994, the Whitney M. Young, Jr. Individual Award from the Greater Phoenix Urban League in 2000, the American Academy of Achievement Golden Plate Award in 2000 and both the American Jewish Committee Institute of Human Relations Award and Center City Starr from Phoenix Community Alliance, in 2001. He was also honored as Valley Leadership Man of the Year in 2005.

Elva Coor is a 5th generation Arizonan. While Coor held roles in government and political activities at the local, state and national level, she also founded a business which she managed for 20 years, and founded the Arizona Chapter of the National Association of Business Women. Elva has served on boards for organizations including the Arizona Historical Society, AWEE, Charter 100 and the Life Development Institute. She has also volunteered at the Phoenix Art Museum and other organizations.

After selling her business and marrying Lattie, she founded the President’s Community Enrichment Programs at ASU which aims to unite the university with its surrounding community. Elva also co-founded Building Great Communities, and founded an organization meant to increase the graduation rate of African American students at ASU. Later, she headed the effort to save Justice Sandra Day O’Connor’s home from demolition. This experience inspired Lattie, to create a project called SpeakOut AZ, through The Center for the Future of Arizona, designed to increase civic participation throughout Arizona and include civics curriculum in schools. She was also honored as Valley Leadership Woman of the Year in 2015.

Her years of working in the political arena, business, academia, and nonprofits led her to value a well-informed and engaged electorate. The success of our great country depends upon providing every child with a good start and great education that prepares them for college, careers and their lives. Our political system is dependent upon that kind of success, and is dependent upon each of us being involved to help millions of people emerge from poverty. 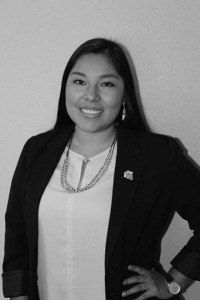 Amber Poleviyuma is a community health student at Arizona State University’s College of Nursing and Health Innovation. Her leadership and volunteerism efforts aimed toward increasing representation and awareness for Native American communities has impacted Arizona State University students and individuals in the surrounding community. Inspired by her family, members of the Hopi tribe in northern Arizona’s Moenkopi village, Poleviyuma aims to use her research to affect policy. In accordance with the Native American values of community and selflessness, she hopes to make a difference in the community, and expand communication and understanding across racial barriers.

While Poleviyuma is interested in addressing a wide variety of issues including environmental, government and health issues, she is especially focused on reducing the number of youth suicides on Native American reservations through culturally relevant preventative programming. In 2014, she worked with the Center for American Indian Resilience to conduct research for the Native American Cancer Prevention project, which explored the experiences of Native American cancer patients with healthcare providers. She helped found Native Americans for Academics, Success and Unity, an ASU club meant to help Native American students reach their academic goals while engaging with the community.

Poleviyuma also worked with the ASU Tribal Nations Tour to reach out to Native American students throughout the state and inspire and encourage these students to pursue a college degree upon completing high school. She is the vice president of the Tau Chapter of Theta Nu Xi Multicultural Sorority, Incorporated, and worked with the Moenkopi Youth and Family Life Enrichment Program to provide youth programs and family events for the residents of her village. She said Martin Luther King Jr. stood up for people who couldn’t stand up for themselves, and she hopes to do the same. She leads by example to create greater understanding among different peoples, and in this way, hopes to show that these issues aren’t just Native American issues—they’re shared issues.